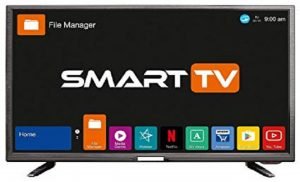 Sales of smart TVs have overtaken sales of conventional TVs in Indian metro cities. The smart TVs accounted a majority 65 per cent share in overall TV sales during the month of October. The number during October last year stood at 45 per cent.

GFK, a sales tracker claimed that smart TVs held 50 per cent share in total TV sales during September 2018. The number was down to 45 per cent in January this year.

Smart TVs require internet connection to stream online content, and internet service providers in the country are coming up with lucrative plans everyday. Many telecom companies are providing unlimited 4G plans in under Rs 1000 bracket. Consumers in the country are not only able to stream as much content as they want but these plans also allow them to connect other devices making it a win-win situation for them.

Many mobile phone smartphone internet providers have also started providing access to online video streaming apps free of cost along with postpaid and prepaid plans. A popular telecom service provider at the moment is not only offering unlimited calls and internet in Rs 499 but is also providing free access to hundreds of movie titles and web series. Some of the popular platforms run and managed by telecom providers include Vodafone Play and Airtel TV.

It is estimated that the commencement of 5G services will further boost smart TV sales in the country.

Atul Bajaj who runs a white goods store in Ghaziabad said, “Customers who walk in the store inquiring about non-smart LED TVs usually end up buying smart TV sets. The decision also makes for a intelligent one as the price difference between the two is not much.”

The availability of a plethora of content available for free streaming also makes for a factor driving smart TV sales in India. There are many websites that do not charge consumers for streaming videos.

Aamir who prefers smart TVs over conventional TV sets said, “A smart TV gives me the option of watching content as per my schedule. I can stream a particular movie or a web-series in middle of the night or during day. Conventional TVs bound me as per their schedule. The beauty of smart TVs lies in the fact that many serials aired on Indian channels can be viewed free of cost through various apps. I love the freedom and cost saving factors that accompany a smart TV.”

India Still Underpenetrated in Adoption of Wearables For Health: IDC