Smartphone shipments from the online channel in India grew 26 per cent year-on-year (YoY) during Q2 2019, according to the latest research from Counterpoint’s Market Monitor service. New launches and multiple summer sale events drove the growth during the quarter. 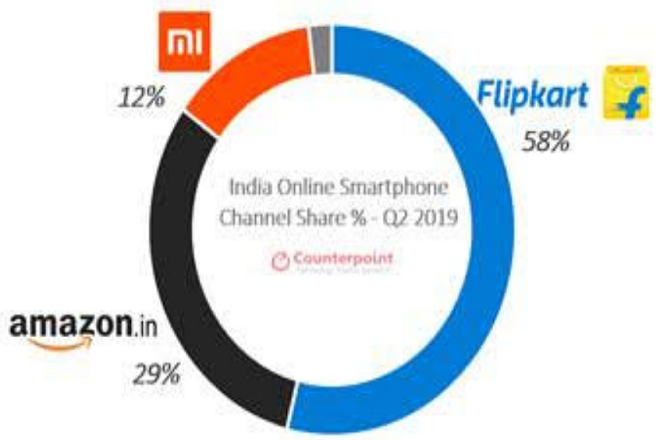 Commenting on the findings, Anshika Jain, research analyst stated, “The growth of Xiaomi and Realme and the focus of Samsung on online channels, with its Galaxy M-series, drove the shipments in the online segment. The success of these three brands also meant that the Rs 15,000 to Rs 20,000 (approx. US$210 – US$280) was the fastest-growing price band in the online segment. Xiaomi Note 7 Pro was the best performing model in this price band followed by the Realme 3 Pro.”

“The major e-commerce portals (Flipkart and Amazon) ran various summer sale campaigns and month-end discounts to promote their sales. Additionally, we saw that OEMs pushing their products towards their own online platforms to divert some of the digital footfall to their own store. The upcoming quarter is crucial in terms of new launches, and lucrative offers as all the leading brands prefer to introduce their new products ahead of the festive season,” she added.

While the smartphone shipments in the offline segment declined by four per cent, the online segment grew by 26 per cent YoY. Mi Super Sale, Honor Days, Flipkart Summer Carnival, Big Shopping Days, Amazon Summer sale, Amazon Fab Fest, Knock Out Offers, Realme 1ST anniversary sale, and Month End Mobile Fest were some of the most popular events during the quarter.

Commenting on the brand performance, Tarun Pathak, associate director, said, “The top five brands captured 84 per cent share of the total online market. Brands and even channels are now diversifying their channel/platform strategy in a bid to increase their reach. For example, Amazon recently infused US$404 million in its India business and is also investing heavily in Future Retail group to strengthen its offline footprint in the Indian market. Meanwhile, Xiaomi’s Mi portal has started to offer ‘Guaranteed Next-Day Delivery’ service in over 150 cities across India.”

Tarun Pathak added, “Going forward, we estimate that the online market will get a strong push from all the major brands as they are gearing up for the upcoming festive season sale. Also, we expect online platforms to focus on targeting higher average selling price (ASP) models on their platforms rather than lower ASP devices to lure customers during the festive season sale.”

The top five brands captured 84 per cent of the total online market. Xiaomi, Realme, Asus, and Samsung contributed the most for Flipkart and accounted for more than four-fifths of its total smartphone shipments. Amazon grew nine per cent YoY driven by with Xiaomi Redmi 6A, Samsung Galaxy M-series, Xiaomi Redmi 7, and the OnePlus 7 Series.

The top five smartphones shipped into online channels were from Xiaomi and Realme. Xiaomi alone captured around 46 per cent of the total online market in Q2 2019. Its Redmi Note 7 Pro series, Redmi 6A, Redmi Note 6 Pro and Redmi Go drove volumes, contributing to more than two-thirds of Xiaomi’s total online sales. In June, Xiaomi introduced an ‘Express Delivery’ program to promote sales on Mi India website.