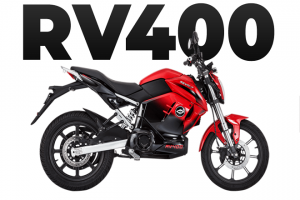 Electric two-wheeler manufacturing company Revolt Intellicorp has announced the launch of its Revolt Cash Down plan for RV 400 and RV 300. The company has also entered the Pune market with RV 400 and RV300.

Under the new plan, cost before the on-road price for the RV 400 will be Rs 98,999 and the RV300 will be sold at Rs 84,999. Revolt also said customers will have to pay for the registration cost, insurance, smart card and one-time mandatory charge of 4G connectivity for three years. The company also claims that the cost before on road is less than the approved FAME II subsidy.

The Revolt RV 400 comes powered by a 3KW electric motor and the company claims it has a top speed of 85 kmph. The company says that the bike takes four and ahalf hours as charging time and the range of the bike is 156 km. Revolt sells the bike in two variants which are black and premium.

Revolt says that RV300 is powered by 1500 W Hub mounted motor. The bike takes three to four hours to charge fully. It comes with a 60 V, 2.7 Ah battery. The company claims that the bike has a range of 180 km/charge.

Sharma further added, “EVs are not just about a shift in vehicles but a shift in mindset for the consumer. We understand that our customers in Pune today are aspiring for more stylish, and lifestyle-oriented products and The RV400 is an important step in catering to these emerging customer needs.”

The company also claims that it has received huge number of bookings each day and it will announce the closure of bookings for the second batch. The company plans to open Revolt Hub in Bangalore, Hyderabad, Mumbai, Ahmedabad and Chennai in the next four months.

Sharma further commented, “We have received an overwhelming response in terms of bookings from our customers in Pune. Both, the RV400 and RV300 reflect our passion and commitment to bring sustainable, affordable mobility to every Indian home and My Revolt Plan is a testimony to this promise of making EVs accessible to the masses.”