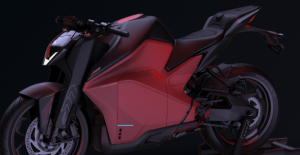 TVS- backed Bangalore-headquartered electric two-wheeler start-up Ultraviolette Automotive launched its first electric bike F77 in India. The company will begin sales from Bangalore first and then expand to other cities. It has priced the bike between Rs 300,000 to Rs 325,000 and deliveries of the bike will start in the third quarter of 2020. The F77 will come with a portable fast charger, crash guards, panniers, and a different visor.

The bike is powered by an air-cooled motor that the produces a max power output of 25kW at 2,250rpm and a peak torque of 90Nm claims the company. The bike can achieve a 0-60kph time of 2.9 seconds and a 0-100kph time of 7.5 seconds says Ultraviolette. It comes with three power modes – Eco, Sport and Insane.

The bike uses three lithium-ion battery packs and the unit takes five hours to charge fully with the standard charger and one and half hours with the fast charger as per the company. The battery has a maximum capacity of 4.2kWh.

The company mentioned that the F77 does not need all three battery packs to run, but it performs optimally with all of them in use. If fully charged, it has a range of 130-150km claims the company. The bike has a kerb weight of 158kg and an accessible seat height of 800mm.

The F77 uses a steel trellis frame and pre-load adjustable monoshock. It also has a 320mm front disc and a 230mm rear disc with dual-channel anti-lock anti-lock braking system (ABS). It comes with Thin Film Transistor (TFT) display and can be connected to an appl that will give information on various segments and allow for customization.

It will also have nine DOF (Degree of Freedom) Inertial Measurement Unit (IMU) and it will be able to share information with the app about how much power and torque are being transmitted at any time.

Lambretta Will Bring G325 Special Electric Scooter to India in...