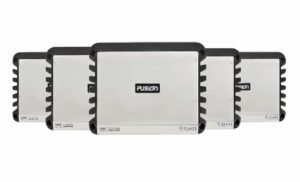 Fusion Entertainment, a brand that operates under the umbrella of Garmin, has announced two new additions to its range of marine audio entertainment products. Dubbed as the Signature Series, it features six and eight-channel class-D marine amplifiers.

Chris Baird, Managing Director, Fusion Entertainment, said, “We are excited to broaden our range of products with the release of the six and eight-channel Signature Series Amplifiers and our new RCA cables.”

The Signature Series Amplifiers are built with Class-D amplification, a aluminium heat sink, a subsonic filter and variable low and high pass crossover filters. Fusion Entertainment claims that these are two ohm stereo stable and include variable bass boost.

Chris commented, “We are well known for our award-winning marine stereo’s, and have invested heavily in delivering innovative, high-quality products and solutions that provide our customers with a superior listening experience across the entire audio chain. The announcement of the additional Signature Series Amplifiers and performance RCA cabling is a further commitment from the brand to deliver the ultimate audio experience from the kick-drum to the eardrum.”