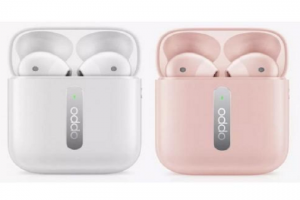 Oppo has launched Enco Free wireless earbuds in China. The earbuds are priced at 699 Yuan (Rs 7,135 approx.) The company will be selling it in black, white and pink colours.

The earbuds come with 13.4mm dynamic driver with a driver sensitivity of 120db. It supports Bluetooth 5.0. It comes with IPX4 rating and is sweat and splash- proof. As per Oppo, this earbud is the world’s first true wireless headset that uses ultra dynamic speakers with dual magnetic circuit design. The earbuds weigh about 4.6 grams.

Five hours of music playback on a single charge

The earbuds are powered by a 31mAh battery. The company claims that it offers up to five hours of music playback on a single charge. It provides an additional 20 hours with the 410mAh charging case and three hours of talk time and an extra 12 hours with the case. The earbuds do not support wireless charging.

The earbuds have controls for volume and music control. It also has detection sensor that automatically pauses the audio when the headset is removed. It also automatically connects with the phone when the user opens the case.

The IoT platform will be called “HeyThings IoT protocol” and audio interconnection protocol. The smartwatch will focus more on health-related services. Bo said that the brand aims to build a multi-terminal and cross-scenario IoT ecosystem. The IoT platform will focus on four things. These are personal, family, travel and office.