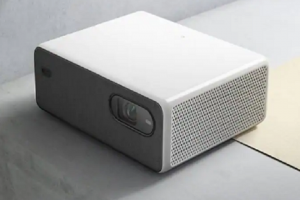 Xiaomi has launched the Mijia laser projector in China. It will be selling the projector at a price of CNY 5,999 ( approx Rs 60,400) in a dark gray colour scheme. The company will make the projector available for sale from 12th December in China.

The projector supports up to 2,400 ANSI lumens and will come with Dolby Virtual Stereo Surround sound effect. The projector can also be connected to a smartphone for audio. It runs on MIUI TV operating system with AI voice control support. As per the company, the projector can offer videos and images at 8K resolution and up to 150-inch wide-screen projection.

The Mijia laser projector comes with an Amlogic T972 core chipset which is clocked at 1.9GHz. It offers up to 63 percent faster performance and 53 percent lower power consumption claims Xiaomi. It also features ALPD 3.0 display technology.

As per a report by GizmoChina, the projector has two 10W dual speakers with dual passive audio. It offers dual-band Wi-Fi alongside a 3.5mm headphone port, two USB2.0 interface and two HDMI ports at the back.

LG is Working on an App that Features Voice Recognition Features