The company has recently announced changes to its leadership team in India. The period between March to September is generally seen as the peak season for sales of air cooling and water cooling products every year 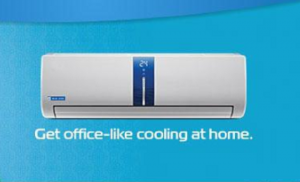 B Thiagarajan, Joint Managing Director, Blue Star Limited, said, “We continue to make significant investments in product development, after-sales service as well as brand building and are confident of enhancing our market share to 13.5 per cent in this financial year.”

The Consumer Complaints Council (CCC) of the Advertising Standards Council of India had banned one of Blue Star’s advertisements in December 2017. The banned advertisement had claimed air inside homes to be 10 times more polluted than the air outside homes.

Interestingly, the company, in 2019, has also completed 75 years of being in existence. It is to be noted here that Blue Star had forayed into the residential cooling consumer electronics segment in 2011.

The company has recently announced changes to its leadership team in India as well. The period between March to September is generally seen as the peak season for sales of air cooling and water cooling products every year.

The company said its ‘Nobody cools better’ brand campaign has resonated well with the audience. Blue Star is also planning to enhance its digital marketing efforts in social media as well as on the internet.

Blue Star’s official statement read, “In terms of advertising and brand communication, the Company has plans to invest about ₹55 crores in the forthcoming summer season as against ₹45 crores in FY 19, with a set of TV commercials supported by ads in mainline dailies, cinema and hoardings.”

It continued, “Blue Star has been persistent with its strategy of Integrated Marketing Communication comprising mass media, field promotions, digital platforms, Press, events and social media, apart from one-to-one marketing which has helped fortify its brand equity among customers and consumers.”

Iotfy Announces Solutions For Converting Normal ACs into Smart Ones