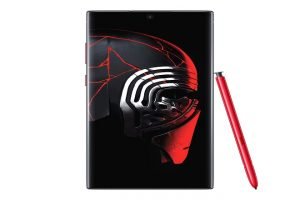 Samsung Electronics has announced a special edition Galaxy Note10+ in advance of the December 20 release of Star Wars: The Rise of Skywalker. This special edition device will be bundled with a specially designed case, a metal badge as a collector’s item, an S Pen, and Galaxy Buds. The bundle also comes with exclusive Star Wars-themed content including wallpapers, shutdown animations, icons and sounds for fans to enjoy.

Collaboration between Samsung and Lucasfilm

The Galaxy Note10+ Star Wars Special Edition will be available from December 10, 2019.  The special edition device adds to the collaboration between Samsung and Lucasfilm, which includes the recently launched holiday campaign film, celebrating the theatrical release of Star Wars: The Rise of Skywalker.

Samsung launched Galaxy Note 10+ at Rs 79,999 and Galaxy Note priced at Rs 69,999 in India. Samsung’s official statement read, “For the first time ever, the Galaxy Note10 comes in two sizes. So, consumers can find the Note that’s best for them.”

The Galaxy Note10 opens the Note to users who want the power of the S Pen and ultimate productivity in a compact form factor, packing a 6.3-inch Cinematic Infinity Display into the most compact Note yet. The Galaxy Note10+ features the biggest Note display ever with a 6.8-inch Cinematic Infinity Display on a device that’s still easy to hold and easy to use.

Earlier this year, HC Hong, president, and CEO, Samsung Southwest Asia, said, “Galaxy Note fans in India are most loyal. They love the Galaxy Note for the infinite possibilities it offers with its big screen, unique S Pen and multitasking capabilities.

He added, “With launch of Galaxy Note10, we are creating a new era of mobile productivity for a generation that believes in doing more in life, by choice. The new devices will appeal to millennials with their sleek design, stunning colors and power-packed features that will keep them going all day.”

Llyod Ropes in Ranveer and Deepika as Brand Ambassadors