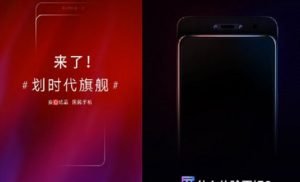 Lenovo had earlier said that the company will be launching Lenovo Z5 Pro on 1st October 2018. However, the company had missed the date. Though the new launch date and camera slider design has been confirmed, Lenovo has still not made it clear whether the launch event will be global or not.

Another video posted on Weibo claims to showcase how the slider mechanism of Lenovo Z5 Pro will work.

The Lenovo Z5 Pro, once launched will be the successor to Lenovo Z5.

Launched earlier this year, Lenovo Z5 was marketed as a truly bezel-less phone. However, the Lenovo Z5 launch was not bezel-less as the company had claimed earlier. It was found to be sporting side bezels and a notch on top of the screen display.

Powered by an Adreno 509 GPU paired with Qualcomm Snapdragon 636 processor, Lenovo Z5 features a 6.2-inch FHD+ notched display. The resolution on offer with the Z5 is 2246×1080 pixels.

The smartphone has a 6GB RAM paired with options of 64GB or 128GB internal storage. The storage space in Lenovo Z5 is expandable via a microSD card. Lenovo Z5 comes paired with an in-built 3,330 mAH battery.

It will be interesting to see whether the company will hold true to what it has teased about Lenovo Z5 Pro on the Weibo network as it had also posted teasers of Z5 on Weibo before its launch, which later were found not true.