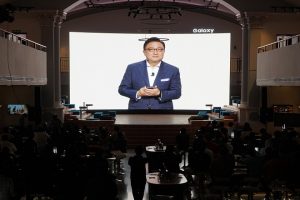 The livestream of the event started at 1.30am. Samsung’s official statement read, “The festivities and performances had kicked off around midnight though. Emcee Danish Sait set the mood and ensured that the audience was in splits with a humourous banter with them. He also narrated how when he was a child his mother used to bring him and his sister Kubra to this building. Once a lifeline of the city, Opera House decayed with age before Samsung took it over in 2018 and revived it.”

DJ Koh, president and CEO for Mobile Business, Samsung Electronics, took the stage in NY. His speech was live telecast to Opera House in India. Microsoft Corporation’s CEO Satya Nadella also came on stage to announce a global tie up with Samsung.

Microsoft’s official statement about the collbaoration with Samsung read, “This begins the next chapter of our long-standing partnership with Samsung and is another step in our journey to bring the best of Microsoft productivity to the devices you know and love. We are excited to announce that the new Samsung Galaxy Note10 phones will help you get more done right out of the box, natively integrated with best-in-class productivity apps and services from Microsoft including OneDrive, Outlook, Your Phone app with Link to Windows, and access to Word, Excel and PowerPoint.”

It continued, “As Satya said today, our ambition is to help people be more productive on any device, anywhere – and the combination of our intelligent experiences with Samsung’s powerful, new devices, including Galaxy Note10 and Galaxy Note10+, make this a reality.”