With the Smart Share feature, the latest Haier LED TVs provide the Android mobile users a new way of screening the mobile content on the large TV screens 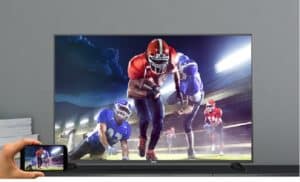 With the Smart Share feature, the latest LED TVs provide the Android mobile users a new way of screening the mobile content on the large TV screens that too without worrying about internet connectivity options such as Wi-Fi or Bluetooth. The consumers can simply turn on the pre-loaded app such as Screen Mirroring or Smart View on their Android phones to connect with Smart Share (Miracast) feature in the new TV and stream their favourite content like music, photos, movies and videos, from their phone gallery. The new feature also allows the users to make video calls and play their favourite games on the large screen of TV.

Design and other features

The new Haier LED TV model – LE43B9200WB comes with full HD resolution of 1920X1080p that offers superior quality picture, at the highest level of details with a 16:9 aspect ratio. The new model is integrated with 10WX2 stereo speakers having Dolby digital decoder that produces high-quality audio output. The TV has various connectivity options such as 3 HDMI inputs and USB port that enable the consumers to connect different entertainment gadgets.

The other model LE32B9200WB LED TV launched by Haier is also a perfect combination of aesthetics and features. The TV has an HD resolution of 1366X768p that offers an outstanding picture quality. The new model comes with 10WX2 sound output and Dolby digital decoder and incorporated with the Auto Volume Leveler for controlling the volume fluctuation. The new LED TV is integrated with 2 HDMI inputs and a USB port that can connect several devices.