Nipun Singhal, who is the MD and CEO of OVOT team, was previously associated with Lloyd from 2008 to 2017 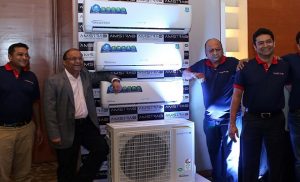 One Vision One Team (OVOT) has launched Amstrad branded air-conditioners in the Indian market. OVOT said that it has partnered with Etronics Global Distributors for distributing its product line-up in Mumbai, Thane and Raigad district, and with Vijay Sales for retail sales.

Nipun Singhal, MD and CEO, OVOT, said, “Amstrad leverages groundbreaking tomorrow’s technology today. Our next generation air conditioners incorporate significant improvements in performance and efficiency over the preceding generation’s products. AMSTRAD air conditioners are packed with features that make your life easier while providing years of value. Brought to you by the experts in the industry, choose an Amstrad air conditioner that meets your need and individual style. Experience smart heavy duty cooling even at an outside temperature of 60 degrees. Amstrad meets the requirements of today’s consumer.”

It is to be noted here that Nilesh Gupta, who is a managing partner in Vijay Sales team, is one of the directors in the OVOT team. Nipun Singhal, who is the MD and CEO of OVOT team is the brain behind Amstrad ACs in India. He was previously associated with Lloyd from 2008 to 2017 time period.

OVOT’s official statement read, “This unique concept is by Nipun Singhal, MD and CEO of OVOT, a senior professional in the consumer durable industry. His last assignment from 2008-2017 was the successful creation of Brand Lloyd from scratch to a leading brand in India.”

OVOT’s statement read, “Keeping the theme in mind, OVOT signed four brand ambassadors who are also “Inspired by Passion” and have reached the gold standard in their respective fields.”

Singhal added, “Our brand ambassadors comprise Real Heroes who truly embody the brand philosophy of AMSTRAD ‘Inspired by Passion‘. Each of them has encountered hurdles and obstacles but have emerged victorious in competition with global giants.”

The company is claiming that Amstrad AC have the ability to cool even at 60 degrees ambient temperature and can function even with voltage between 130- 270 V. The series is also WiFi enabled and can connect to a Mobile Phone/Google Home/ Alexa, work on Voice Command and through App.

Panasonic Launches Icon Series of ACs in India, Ties Up With...