The company has launched a total of 54 air-conditioners (ACs) in the country. AC business in India usually peaks between the months of March and August 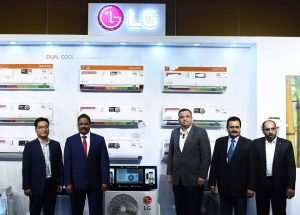 LG Electronics has announced the launch of 54 new AC models with five and three star rating from the Bureau Energy Efficiency (BEE). The company claims that these ACs work on Dualcool Inverter technology which adjusts the cooling as per user requirement by controlling the compressor speed. All these models have been announced in the price range of Rs 31,990 to Rs 69,990.

The company has also launched 22 smart AC models in India. AC business in India usually peaks between the months of March and August.

The electronics giant has equipped its smart ACs with Smart ThinQ technology, which, as per the company, allows the users to control and monitor ACs at anytime and from anywhere with an app on the phone. Apart from control, consumers also get filter cleaning notification and control multiple home appliances through smart ThinQ.

Babu said, “With the introduction of such user-centric products, LG has spearheaded a new era of smart technology in the white goods space. Last year we had launched India’s 1st Dual Inverter Window AC. This year we are extending this category by introducing 3 more models.”

LG is claiming that it has equipped its latest AC range with dual inverter compressor technology. This technology, as per the company, constantly adjusts the compressor’s speed to maintain desired levels of temperature and assured savings – both power and electricity bills.

Company’s official statement read, “The new range comes with mosquito away technology that promises to give better protection from mosquito-borne diseases. The ultra-sonic waves are emitted at a specific frequency that reduces the mosquito’s ability to sense CO2 exhaled by humans.”

Bhardwaj added, “We have been introducing products based on Indian insights, new range is an extension of same. India is changing rapidly so as the Indian consumers. This new lineup has been developed for the new age consumers as per their lifestyle and requirements. Nowadays consumers are most aware about the environment and at the same time concerned about performance that’s why our ACs are equipped with Eco-friendly Refrigerant (R32). These ACs have cooling score of 5 thus the performance will be optimum even at higher outside temperature.”