Llyod is a brand owned by Havells in India. It is providing 10 years warranty on inverter compressors with these latest ACs 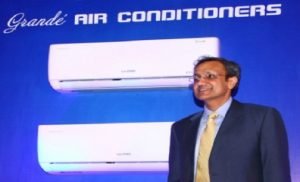 India based appliances and consumer electronics brand Lloyd has announced the launch of three new air conditioners in India. Starting at a price of Rs 45,990, the brand claims that these ACs are capable of filtering air pollution, and come installed with PM 2.5 filters.

The latest launched Grande Series Lloyd air conditioners include an inverter 5 star AC, a 3 star AC and a fixed speed 3 star AC. Inverter 5 star AC has been priced highest at Rs 79,990 in India.

The brand claims that all the models comply with the government mandated Indian Seasonal Energy Efficiency Ratio (ISEE) Ratings. Lloyd is providing 10 years warranty on inverter compressors equipped in the ACs.

These new ACs, as per Lloyd, have the ability to cool a room to 18 degree Celsius in just 45 seconds. The models support plug and play WiFi. A user can control these smart ACs through an app from anywhere in the world. All the ACs offer four-way swing to provide uniform cooling across a room.

Llyod says that the new fish-fin design increases the air throw distance by up to 10 per cent. These also come equipped with 100 per cent copper coils. The low-Freon protection system reports an error code and shut downs ACs in case of a refrigerant leak to ensure safety.

Llyod, apart from Crabtree and Standard, is a brand owned by Havells in India. The brand also sells LED TVs, washing machines and chest freezers in the country.