The company claims that these AirPods feature 50 per cent more talk time than the previous generation ones. Apple AirPods are one of the top selling wireless earbuds in the world 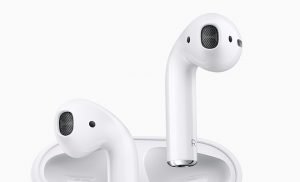 Phil Schiller, Apple’s senior vice president of Worldwide Marketing, said, “The world’s best wireless headphones just got even better with the new AirPods. They are powered by the new Apple-designed H1 chip which brings an extra hour of talk time, faster connections, hands-free ‘Hey Siri’ and the convenience of a new wireless battery case.”

The company claims that these AirPods feature 50 per cent more talk time than the previous generation ones. Apple AirPods are one of the top selling wireless earbuds in the world. Apple AirPods has been tagged as the market leader in the hearables category according to recent reports by various research and consulting companies.

The company’s official statement read, “The new AirPods come with either the standard charging case or the new Wireless Charging Case. Each case holds additional charges for more than 24 hours of total listening time, ensuring AirPods are charged and ready to go whenever you are.”

The company claims the new Apple-designed H1 chip features custom audio architecture to create a revolutionary audio experience and improved synchronisation. H1 allows AirPods to deliver up to 50 per cent more talk time compared to first generation AirPods. Switching between devices while listening to music on iPhone, Apple Watch or iPad is more seamless than ever with two times faster connect times.

Apple’s official statement read, “For the first time, AirPods now feature the convenience of ‘Hey Siri’ making it easier to change songs, make a call, adjust the volume or get directions simply by saying, ‘Hey Siri’.”