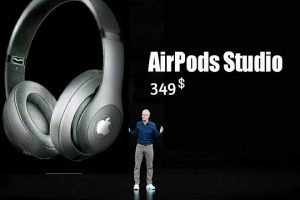 Recently, Apple stopped selling rival brands’ earphones and speakers, people expected that the brand will be launching its own product lineup in the event on October 13 alongside the iPhone 12 series. However, according to recent reports Apple will not be launching the Airpods Studio headphones in Tuesday’s event.

As per tipster Jon Prosser who is responsible for leaks ahead of Apple’s launch of new products, the company will be launching HomePod mini instead of the Airpods Studio. HomePod mini is likely to be Apple’s answer to Google’s recently launched home smart speaker NestAudio. The current Apple HomePod is priced at INR 19,999.

According to the tipster’s sources, the over the ear headphones won’t feature in the Tuesday’s event and will be unveiled in Apple’s rumoured November event. The much-awaited AirPods studio has been delayed for months now. The headphones will come in two variants — sports and luxury. The sports one is likely to be targetted at fitness enthusiasts and commuters whereas the luxury model will feature premium materials like leather and metal.

On the other hand, AirTags was also expected to be launched alongside the iPhone 12 series. To add more to the disappointment, it isn’t expected to launch in 2020 at all. The AirTags expected launch date can be in March 2021 which means it has been delayed for more than a year.

AirTags is a vital tool to track Apple devices via Find My App. It will sport an Ultra-Wideband technology, the same as the one in iPhone 11 series. These are just small metal discs with silicone on the edges and Apple logo in the middle. It’s expected price was somewhere in between $69 (INR 5,034) to $99 (INR 7,223).