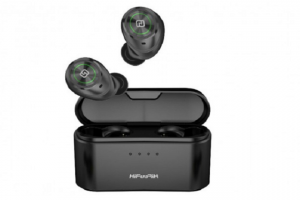 HiFuture has launched TidyBudsPro earphones in India. The company will be selling the newly-launched product at a price of Rs 4,499 through online channels Amazon and Flipkart in white and black colour. The company is also providing a one-year warranty on the product.

The earphones come with a charging case that comes with a 3000 mAh battery and can be used as a mini power bank to charge a mobile phone too claims the company. HiFuture claims that the earphones give eight hours of playtime from a single charge and 100 extra hours via the charging case. It also says that Users can also charge their earbuds up to 10-12 times from a fully charged charging case.

The earphones come with Realtek chipset and support for Bluetooth 5.0 technology. The case has four LED indicators at the front to indicate the battery capacity and a USB port on the back of the case to charge the device.

The company says that the earphone come with IPX4 rating which makes it sweat and splash-proof. It has intuitive touchpad technology built-in both earbuds through which the user can control music, call and access voice assistant with one touch.

TidyBudsPro comes with the feature to support binaural calls through which users can listen and talk through both earpieces. The device is compatible with both android and iOS devices and supports Google voice and Siri.

Recently, HiFuture had launched a Qualcomm powered neckband style in-ear wireless earphones in India. It had priced at Rs 2,999 and is selling it on Flipkart and Amazon India.