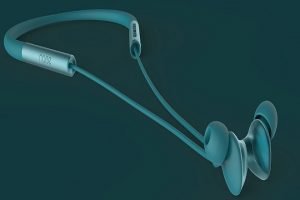 Noise has launched Noise Tune Flex, a Bluetooth neckband-style headset priced at Rs. 2,199. The Noise Tune Flex can be purchased on Amazon and Flipkart.

It is equipped with Qualcomm CVC 8.0 technology, which offers noise cancellation to improve sound quality on voice calls. The device also comes with Bluetooth 5.0 for connectivity, allows dual pairing so that the headset can be used simultaneously with two devices, and is IPX5 rated for water resistance. The company claims that it has a battery life of up to 12 hours of listening per charge.

The earphones are available in three colors – space grey, teal green, and bronze grey. There are also controls on the neckband for playback, volume, and calls.

Gurgaon based technology company recently launched a fitness focussed smartwatch called ColorFit Pro 2. It was priced at Rs.2999 through online e-commerce platforms and on its company website.

In July this year, Gonoise announced the launch of Colorfit 2 fitness band in India. Featuring a 24-hour heart rate meter, it came with a price tag of Rs 1,999.

The fitness band came with a 0.96-inch LCD screen. Unlike its predecessor, this fitness band did not feature a touch screen. Instead, it came equipped with a touch bottom. The company retailed Colorfit 2 in dusk pink, twilight blue and midnight black colors.