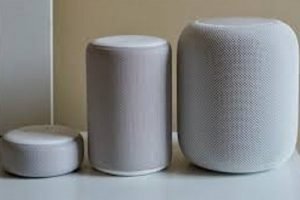 Apple could launch a HomePod Mini at its high-speed event. As per the latest reports, the Cupertino giant might unveil a HomePod Mini along with the iPhone 12 series on October 13. The report reveals that the HomePod Mini will not only be smaller but also more affordable than the HomePod Mini. It is also speculated to come with interesting features.

As per noted tipster Ice Universe, the new small speaker by Apple will be called HomePod Mini, which will be priced at $99. The speaker will have a small form factor and would be 3.3-inches high. The original HomePod is approximately 6.5 inches high. He also tweeted that the HomePod Mini will be powered by an S5 Processor which is powered by an Apple Watch SE.

The HomePod Mini will reportedly go on sale on November 16-17. A Bloomberg report has claimed that the new smart speaker would include two tweeters as opposed to HomePod’s seven.

Along with the HomePod Mini, there were reports of Apple launching its first-ever premium headphones AirPods Studio on the October 13 event. However, as per the latest leaks on Weibo by Kang, the AirPods will not launch anytime soon. Noted Tipster, Jon Prosser had also confirmed that “AirPods Studio will NOT be in the event.”