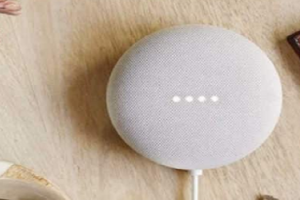 Google has launched the Nest Mini smart speaker in India. It has priced it at Rs 4,499 and will be selling it through the online platform Flipkart. Globally, the product was launched in October with the Pixel 4 series. The smart speaker is a successor to Google Home Mini.

The Google Nest Mini comes with a wall mount. For streaming music, it supports YouTube Music, Spotify, Gaana, JioSaavn and Wynk. It also works with smart home devices from brands like Philips Hue, Syska and others. The company will be selling the speaker in chalk and charcoal colour variants. The speaker comes with a dedicated chip for machine learning claims Google.

Bass twice as strong as the original Google Home Mini

The company said in a statement, “Nest Mini provides bass that’s twice as strong as the original Google Home Mini (measured from 60-100 Hz at maximum volume). Google’s expert audio engineers developed proprietary audio tuning software, allowing users to get the most out of the hardware.”

The Assistant on the speaker automatically modulates the output sound according to the background noise in the room claims Google. It also senses proximity to light up the LED as soon as the user’s hand gets close to the device which guides the user on where to tap and adjust the volume.The Nest Mini has the same design as the original Mini with soft rounded edges.