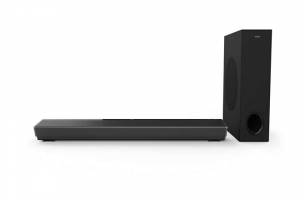 Philips has launched 3.1CH Dolby Atmos soundbar in India. It has priced the soundbar at Rs 31,990 and will sell it through online and offline retailers.

The most striking feature of the soundbar is that it has a 320W sub-woofer. It can be connected to the soundbar wirelessly. The company said that it has three channels that give height, depth, and creates a virtual 3D surround sound.

Jonce Lin, country head, Philips Branded Television, audio and monitors, TPV Technology India Pvt. Ltd. said, “Nowadays, the soundbars are must-have gadget that are designed to enhance the viewing experience for all audiophiles and cinephiles. Consumers will now be able to enjoy thrilling moments with the feature-loaded TAPB603. With a sleek design and Dolby Atmos, consumers are in for a treat at a reasonable cost.”

The TAPB603 Dolby Atmos Soundbar comes with three HDMI ports with ARC and 4K pass-through. It also has a USB port, an audio-in input, and an optical input. It supports Bluetooth connectivity.

In December last year, Philips had launched SHB2515 and SHB2505 wireless in-ear headphones in India and had priced them at Rs 8,999 and Rs 7,999 respectively. The company is selling them through online channels and offline stores