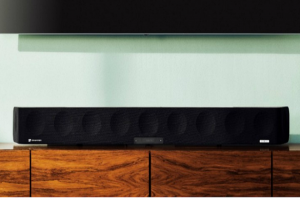 Sennheiser has launched Ambeo soundbar in India. It has priced the soundbar at Rs1,99,990 and put it for sale through offline stores of 15 distributors. The soundbar made its debut at CES 2019. It comes with 13 speakers, six woofers, five tweeters, and two top-firing full-range speakers. It is compatible with Dolby Atmos, MPEG-H and DTS: X.

It is powered by a combination of 13 drivers and Fraunhofer IIS-based virtualisation technology. The company claims that this creates a 5.1.4 sound system-like sound experience. the soundbar also comes with room calibration which optimises sound for the individual room and preferred seating position.

The Upmix Technology can convert stereo or 5.1 audio to 3D sound. The product is equipped with five presets- movie, music, sports, news and neutral. It is also equipped with built-in Google Chromecast, Bluetooth, HDMI eARC/CEC, three HDMI outputs. It also has an optical audio port, and an AUX (RCA) input to support connectivity. The settings can be adjusted with Sennheiser’s Smart Control App. The company has made the app available on both Android and iOS.