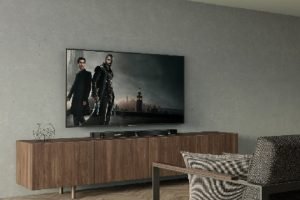 Sony India has announced the launch of HT-Z9F soundbar supported by Dolby Atmos in India. The company, on the sidelines, has also launched a rear surround speaker SA-Z9R as well. As a matter of fact, Sony as a promotional offer, will be giving this rear surround speaker free to people pre-booking the soundbar between 1 to 8 July 2019.

Sunil Nayyar, MD, Sony India said “The new HT-Z9F, will be a game changer for the home-cinema segment. Our exciting collaboration with Dolby for HT-Z9F will enable users to enjoy cinematic-audio powered by Dolby Atmos, right in the comfort of their homes, thus, giving them more reasons to love Sony”.

The company has collaborated with Dolby to develop this soundbar for the Indian market. Dolby and Sony, as per the company, are working on bringing more such products in the country.

“Dolby Atmos transports you from an ordinary moment into an extraordinary experience with moving audio. With the new Sony HT-Z9F, it will now be easier to enjoy the Dolby Atmos experience at home. Dolby and Sony are collaborating locally in India to bring spectacular experiences to the home,” said Ashim Mathur, senior regional marketing director, Emerging Markets, Dolby Laboratories.

This latest soundbar by Sony is compatible with Amazon Alexa and Google Assistant. Sony’s official statement read, “Alexa lets you control the HT-Z9F with just your voice. Just ask Alexa to book at cab, movie tickets, order food or listen to music from hundreds of stations by controlling your playback experience with voice. Explore nearly 20,000 skills available on Alexa Skills Store with your Z9F. You can turn up the volume, skip to the next track, or stop the music, all without lifting a finger. You also can voice control Sony’s audio products with Google Home.”

It continued, “The HT-Z9F is made for the latest home cinema formats. It supports 4K HDR and Dolby Vision pass through so that the original picture quality is passed through the Soundbar directly to the TV without any loss of quality, resulting in great colour clarity and brightness. It supports high-resolution audio formats. Music files can be enjoyed to near high-resolution audio quality thanks to DSEE HX (digital sound enhancement engine feature).”

Samsung Has Announced the Launch of Q-Series Soundbars