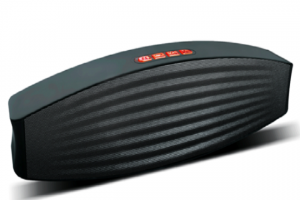 VingaJoy has launched Sound Zilla smart speaker in India. It has priced the speaker at Rs 1,299. The company will be selling the speaker through its website and other online e-commerce platforms.

The VingaJoy Sound Zilla is a 30.48 cm (12-inch) portable speaker. It comes with true wireless stereo (TWS) feature that will allow users to connect the speaker with another Sound Zilla speaker. The company will sell the speaker in five colours including deep black, bright red, vivid blue, army green and ivory cream.

Mandeep Arora, co-founder, VingaJoy said,  “At VingaJoy, we aim to provide luxury in sound that makes every song an adventure. Through Sound Zilla, we seek to provide enjoyable dynamics and rhythm which is refined yet entertaining for sensational music experience.”

The speaker is powered by a 1800mAh rechargeable battery. As per the company, this battery gives four hours of backup. It supports Bluetooth version 5.0 + ERD, Radio, AUX and comes with a Micro SD card.

This speaker is compatible with Bluetooth, Aux, Pen Drive, SD Card, and FM radio connectivity. The company is selling it through its official website and as well as at the offline retail stores.

It had also launched Beat Machine speaker in India. It is selling this speaker at Rs 3,299. The wireless speaker comes with a frequency range of 60Hz-15KHz. The speaker is equipped with an enhanced bass driver with a power output of 5+3W claims Vingajoy.

The company says that the speaker has a wooden construction. It can be connected to smartphones, laptops and tablets. It is compatible with Aux, pendrive and has a SD card slot. The speaker also comes equipped with FM.