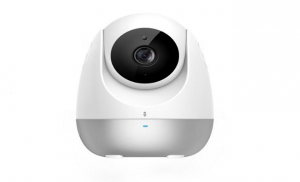 360 Smart AI, a security brand offering IoT products and solutions, has added another camera to its smart security camera portfolio in India. Dubbed 360 Robot Camera D706, this camera, as per the company can be set up by users themselves.

Mukesh Chaudhary, head India and SAARC said, “Indeed with changing times, one needs to bid goodbye to traditional CCTV cameras and adopt the new age technology which does more than just surveillance. Our newest range of smart cameras shall redefine the security market in India.”

The company has announced this camera at a price tag of Rs 8,999 in India. Mi is offering a 360-degree view camera at Rs 2,699, while Godrej is offering one at Rs 1,999 on a popular e-commerce portal in the country.

This camera, as per the company, can be installed on any surface. It is equipped with a 1080P HD image sensor and has the ability to capture 1920 × 1080P pixels HD images. The company said that its latest home security camera also features nigh vision mode.

It continued, “Supporting two-way audio, with two MP CMOS sensor connect to your family with high clear 2-way audio and face to face chat experience. Crafted with the industry-leading AI visual algorithm the camera comes InPrivate Mode that shall disable the live feed both Audio and Video for a temporary period. The camera further supports custom-built panoramic cruise, customised continuous cruise and auto cruise. With smart mobile tracking-tech, the user be prompted an alert whenever a suspicious or invasive object enters the frame which the camera will auto-track and sent to you in only five seconds. The camera can accurately identify humanoid changes, crying sound detection, and even abnormal sound.”