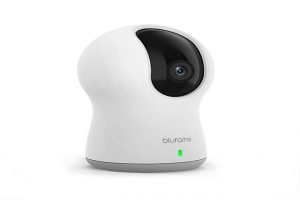 Blurams has announced the launch of its first Smart Security Camera -blurams Dome Pro. It comes with the Facial Recognition feature which will help create a database of friends and family members who regularly visit one’s house. The product is priced at Rs. 4499 and will be available on Amazon.in.

“Blurams Dome Pro is a blend of design, performance and robust experience. Staying true to its tagline of Living Carefree, the newly the launched product provides features like Facial Recognition, Motion/ Sound/ Human Detection, which makes it easy to keep an eye on your kids from anywhere and through Siren alarm, one can deter human intruder,” said Kun CAI, Blurams.

He added, “Our core vision for Indian Market is to deliver value for money products and services with speed, efficiency, and innovation, engrained with high-quality specifications.”

It is equipped with a built-in Bluetooth chip which enables family members to view 4 cameras on one screen via their Android / iOS phones and Web app for privacy. It also has other features such as distortion correction, 3D Noise Reduction, 2-way audio, Built-in microphone & speaker, up to 128GB microSD cards, 24 hours free cloud storage services for the lifetime.

It has an 8-meter range with 8pcs IR-LEDs for night vision, which turns on automatically in low light so one can see clearly even in the dark. The security camera works with Alexa & Google Assistant and offers two-way audio, “listen and talk back” through the camera from a smartphone.