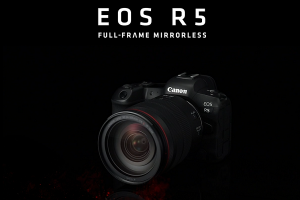 Camera and imaging giant, Canon has launched the latest flagship cameras, the Canon EOS R5 and R6. The product will be retailed at a starting price of INR 2,15,995. The cameras are launched almost two years after the company’s first full-frame mirrorless camera, the EOS R launched in 2018. Canon EOS R5 and R6 can be pre-booked via Canon India website. Also, the product will be retailed via online and offline channels from August.

Canon has revealed that the devices will go on sale on Canon stores and other authorized sellers from August. The company will retail the EOS R5 at INR 3,39,995 and R6 at INR 2,15,995. The consumers can pre-order the cameras via the Canon India website. The company is also offering an additional one-year warranty along with a Canon camera bag.

EOS R5 and R6 will feature with a 24-105mm f/4 lens in the kit option. However, the R6 will feature the option to select the 24-105mm f/4-7.1 lens. The existing models in the EOS R lineup including the R and the RP target the causal shooters. The company claims that the R5 and R6 are aimed at the professional market offering the best.

As per the Canon’s announcement, the EOS R5 features a 45-megapixel full-frame sensor along with an ISO range of 100-51,200. The highlight of the camera is claimed to be its ability to shoot 8K RAW without any crop. Users can shoot 8K at 29.97fps in 4:2:2 10-bit raw. The company claims that users can shoot 8K video continuously for about 20 minutes at room temperature. The product features 12fps with the mechanical shutter and 20fps with the electronic shutter.

Canon has added in-body stabilization along about 100 percent coverage with a dual-pixel technology-based autofocus system. The autofocus system touts 1,053 zones along with eye-tracking support for dogs, cats, and birds along with humans. Also, the product will feature an electronics viewfinder along with a 120fps refresh rate and 5.76-million dot resolution. It features a 3.2-inch touch screen with a 2.1 million dot resolution on the back with a vari-angle design.

The EOS R6 features a 20.1-megapixel sensor, 4K video at 60fps, a 3.69 million dots resolution viewfinder, and more. Canon has also added a 3-inch touch screen with 1.62 million dots on the back. Also, the company will launch four new RF-mount lenses later this year.