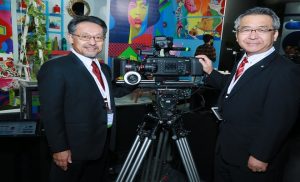 The Canon Cinema EOS C700FF camera launch taking place at a Film industry event clarifies the target audience that the company has set in mind.

Mr. Kazutada Kobayashi, President and CEO, Canon India, said “Innovation being an essential pillar for us at Canon India, we have always brought to forefront supreme imaging solutions for our customers. We are delighted to continue our association with the Broadcast India Show, an opportune platform to showcase some of our best technology in the Cinema EOS range and Professional Video cameras range to the customer community and further receiving first hand feedback from them. This will be a step further to fortify our foothold in the flourishing cinema business in the country. Encouraged by the overwhelming response received during the previous years, we are looking forward to engage, connect and collaborate with newer audiences at the show this year.”

Capable of 5.9K RAW recording up to 50/60 frames per second with the optional Codex CDX-36150 recorder, the Canon EOS C700FF can also record ProRes and XF-AVC up to 4K to internal CFast cards. When over sampling 5.9K in 4K/UHD recording moire is suppressed and noise graininess improved, resulting in higher quality video compared to native 4K image capture.

Both EF and PL mount models are available, with the EF mount option including Canon’s Dual Pixel CMOS AF technology for precision focusing that can be crucial when recording in high resolution.