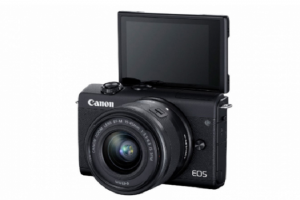 The camera comes with a 24.1MP APS-C CMOS sensor and is powered by a DIGIC 8 Imaging Processor. It comes with auto focus points of 123 with eye-detect autofocus for focusing on people. It can capture video with up to 24 fps. It features Dual Pixel CMOS AF with Eye Detection AF. This feature ensures that the subject’s eyes are always in focus while tracking moving subjects claims Canon. It also has a creative assist function tahtw will help users to adjust camera settings and select from a range of photography styles.

Up to 90 minutes of video recording

The camera also has a silent shooting mode through which the camera can shoot still images with minimal sound says Canon. The camera is equipped with a rechargeable Li-ion Battery LP-E12 that will last up to 90 minutes of video recording and 315 still shots on a single charge claims Canon.

The camera also has a LCD touchscreen which can be flipped 180 degrees making it suitable for vlogging. It can connect to smart devices via Bluetooth and WiFi with the help of Canon camera connect app on Android and iOS.

The company now operates a total of 11 such lounges in India. Canon’s 11 BIS lounges are located one each in Chennai, Raipur, Ahmedabad, Bangalore, Siliguri, Nashik, Alipurduar and Kolkata. The company operated two of these in Delhi.