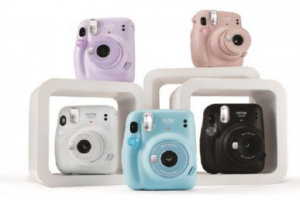 Fujifilm has launched Instax Mini 11 camera in India. The camera comes with automatic exposure and selfie mode features in five colours of blush pink, sky blue, charcoal gray, ice white and lilac purple. The company will sell the camera from April in the country. Fujifilm has also announced two new mini-format Instax films, Blue Marble and White Marble. Both of them feature marble patterns on the frames.

The camera comes with Automatic Exposure feature which automatically senses the level of ambient light when the shutter is pressed. It improves the shutter speed and flash output according to the light condition. It can also rightly expose the subject even in low light conditions.

It comes with new Selfie Mode, which can be activated by pulling out the front-end edge of the lens after the camera is in On condition. It comes with two replaceable button accessories.