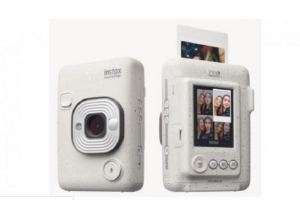 Fujifilm has launched Instax Mini LiPlay instant camera in India. It will be selling the camera at a price of Rs 13,799 in stone white, elegant black and blush gold colour. The company claims the camera is a hybrid which also acts as a printer.

Haruto Iwata, managing director, Fujifilm India, said, “The all-in-one instax LiPlay has been designed keeping in mind the ever changing preferences of the Indian youth, offering unique features to complement the needs of these young customers. At Fujifilm, we are constantly committed to expanding the world of instant photography in India’s growing smartphone market.”

The camera comes equipped with wireless connectivity options that enable one to print photos directly from his smartphone. The user can review photos captured on the device via the Liquid Crystal Display (LCD) monitor and choose what image he want to print. It has sound record feature that can record up to 10 seconds of audio.

The audio recording can be printed with the photo in the form of a Quick Response (QR) Code. To listen to this audio, users need to download Instax Mini LiPlay app from Google Play Store and the company has claimed that it stores the audio data for one year from the time it is uploaded on the server.

Instax Mini LiPlay comes with direct print function which allows the user to print any image from his smartphone. The image is printed on instax mini film. The camera also supports remote shooting option. It has a mini film along with a metallic instax mini film Confetti and instax square film star-illumination claims Fujifilm.