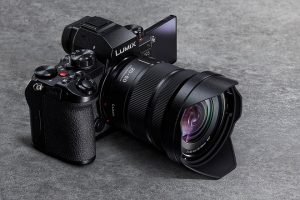 Panasonic LUMIX S5 was launched in the month of September for the global market. The LUMIX S5 has now arrived in India with a price tag of INR 1,64,900. The latest addition to the S series cameras, Panasonic LUMIX S5 is unique for its compact form factor. The lightweight LUMIX S5 camera body, without compromising on video and still capabilities, targets digital content creators.

Panasonic LUMIX S5 has been released in India and packs a handful of impressive specs and features. The LUMIX S5 uses an L-mount system and packs a 24.2-megapixel full-frame CMOS sensor. The latest Panasonic camera comes with an ISO of up to 51200 when shooting photos, 5-axis IBIS for better hand-hold shots, AF for both photos and video recording, 14+ stops of Dynamic Range and more.

“The most promising aspect of S5 is the improved auto focus (AF) capability that now includes head detection along with face and eye detection,” claims Panasonic while launching LUMIX S5 in India.

The new mirrorless Panasonic camera features an electronic viewfinder that has a 2.36 million-dot OLED display and 0.74x magnification. For the back panel, users get a 3-inch 1.84-dot LCD display. Other features include dual memory card slots: one UHS-I and another UHS-II. Camera users get a 2200mAh battery in the LUMIX S5 model. For connectivity, there is a USB-C port and WiFi.