The brand has introduced this designer fan at Rs 29,990 in India. Fanzart has over 40 franchise stores in the country 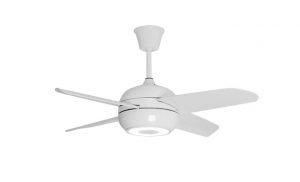 Fanzart has announced the launch of a new ceiling fan equipped with Bluetooth speaker and LED lights in India. Dubbed Melody, the company has priced the fan at Rs 29,990 in the country.

An official statement released by the brand read, “Fanzart, India’s very own exclusive brand for designer fans, brings an extension to its exotic collection of ‘Designer Fans’ with ‘Melody’ – a stylish, contemporary ceiling fan equipped with Bluetooth speakers and an LED light-kit. The Melody is an all-round entertainment device that keeps your room cool and helps you unwind to the music of your choice.”

This Bangalore-headquartered brand focuses on designing and developing premium range fans. With 42 brick-and-mortar experience centres, as well as its online presence, Fanzart, apart from India, also caters to the SAARC and Middle Eastern markets.

The company claims the angular blades on the Melody provide 3X airflow as a result of its unique and smart design. The Melody is engineered to deliver sound seamlessly with Whisper Quiet Technology which is applied on all of Fanzart’s products.

Fanzart has equipped the fan with a 10W speaker. This Bluetooth speaker is fitted to the hub and it projects music throughout a room. The bright ring LED light set around the speaker offers white light setting. The Melody can be paired to any Bluetooth device, claims the company. Furthermore, the fan also features an infrared remote control for wind speed, LED light and fan settings.

Anil Lala, CEO Fanzart, said, “Fanzart has remarkably transformed the modest and simple looking ceiling fans to the beautiful designer fans. The fan does not just score in good looks but beyond, bringing the sound-and-light show in your living room. It’s time the age-old fan got a designer makeover.”

Stabilizer Brand V-Guard Now Has a Smart Fan in its Product...