The latest feature phone by Do Mobile features 1750 mAh battery and a 2.4-inch display. It seems like this product is targeted at Tier-3 and rural markets in the country 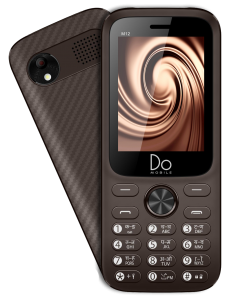 Do Mobile has announced the launch of its newest M12 feature phone in India. The brand seems to be betting upon 1750 mAh battery and LED torch to drive the sales of the phone.

Sandeep Mehra, sales head, Do Mobile, said, “We are thrilled to bring our compact light Box – M12 feature phone, this will be ideal mobile for consumers in budget segment. Celebrate this New Year with M12 and bring fun, charm and light to life.”

Research firm techARC had earlier estimated that around 150 million feature phones will be sold in India during 2019. The quoted figures are the highest ever in a single year.

It is to be noted here that several brands including the likes of itel, Intex and even HMD Global Nokia have also launched feature phones in the past. Intex had just announced the launch of 10 new feature phones for the Indian market. Many people in the rural as well as Tier-3 markets still rely on feature phones for connectivity.

Interestingly, African markets are also registering an upsurge in the demand of feature phones. The continent, as a whole, also presents an incredible opportunity for feature phone brands to establish a good market share.

The feature phone sports a 2.4-inch display and comes equipped with a 1750 mAh battery. Do Mobile is claiming that users can upgrade the phone’s memory by up to 32 GB. The dual sim phone also supports auto call recording along with wireless FM.

A few additional features in the phone include vibration mode, Bluetooth, video support for MP3 and MP4 formats. M12 comes with multi-language support for 22 languages.

Do Mobile claims that it is present across 15 states in India with 450+ distributors and 12000+ retailers.

Apple Starts Selling iPad 2019 in India at a Starting Price...