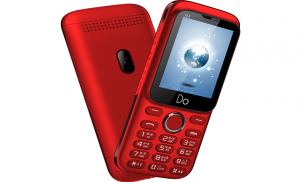 India based Do Mobiles have announced the launch of a M4 feature phone in India. Dubbed M4, the company has priced it at Rs 949 only.

Going by the price and basic features that the Do M4 mobile phone boosts, it seems that it is aimed  at tier two and tier three cities and rural market in India.

Speaking on the launch Mr. Sandeep Mehra, sales head, Do Mobile said, “Another star performer that shall keep you going – M4, not only this phone is packed with key important features but also comes at best price,crafted specifically for the Indian consumers in mind.”

As said earlier the company is looking forward to target tier two, tier three and rural markets in India. Do Mobiles claims that it will leverage its strong network of more than 450 distributors and 12000 retailers located across 15 states in India to drive sales.

Do Mobiles M4 will be available in Rajasthan, Gujarat, Uttar Pradesh, Tamil Nadu, Kerala, Karnataka, North Eastern states among others in the country. The company has not revealed whether the M4 mobile phone would be available on online e-commerce portals or not.

The latest M4 mobile phone will compete against the likes of InFocus Hero Play M1, Lava Captain N1 Lite, I Kall K36, Fox Sultan, Megaus Eco and many more in the Indian market.

The company had integrated M4 mobile phone with a 1000mAH battery and a 2.4 inch display.

M4’s storage capacity can be expanded to 32GB via a microSD card. Up to 32GB expandable memory may prove to be a USP especially in the rural markets as consumers there prefer viewing videos and listening to music on their phones.