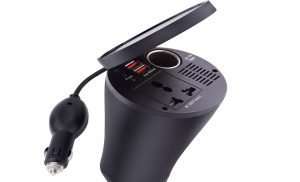 Lapcare, a brand known for its IT laptop peripherals and accessories has announced the launch of all-new 150 W and 200 W car power inverters in India. The company claims that its latest smart car power inverters are ideal for usage with laptops, car monitors/DVDs, mobile phones, tabs, digital cameras, video games, USB chargers and portable speakers.

Lapcare has priced the 150 W car charger at Rs 2,199 while the 200 W car charger is priced at Rs 3,499. Both come with one-year warranty. It is promising one-month extra warranty for users who complete online product registration on Lapcare India website.

Lapcare has targeted the swivel designed 150 W car power inverter with a single USB port and three pin socket at extensive car travellers. Lapcare 150W car power inverter is capable of converting the DC car power to AC current which can be used to give electrical energy to practically any device that is normally used while travelling. It includes laptops, mobile phones, tabs, gaming consoles, car coolers, cameras etc.

The company claims that the car power inverter offers an excellent solution for emergency recharging while travelling long distances.

The AC socket of this device operates like a main socket found in homes and offices. Lapcare 200W car power inverter has been targeted at on-the-move laptop users. Users have to plug it into their car’s DC electrical system and it converts the power to AC.