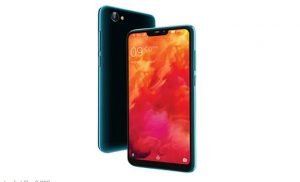 Lava International has announced the launch of its new flagship smartphone Lava Z92 in India. The brand claims that the smartphone is equipped with features which offer a swift, lag-free user experience aided by higher processor speed. Lava has priced the Z92 smartphone at Rs 9,999 in the country.

Commenting on the launch, Jasneet Singh, head product- smartphones, Lava International, said, “We are excited to announce the launch of LAVA Z92 under the Z series. Keeping in mind the demand of consumers who look for higher performance, durability and a bigger screen along with great looks, we are excited to present our first offering of 2019, the LAVA Z92. This smartphone is equipped with Helio P22 Octa-Core Processor for unrestricted multitasking.”

Targeting the below Rs 10,000 smartphone segment

The phone seems to be targeted at the below-Rs 10,000 smartphone segment in India. Many brands including the likes of Realme, Xiaomi and Huawei are offering phones in the same category.

Interestingly, Samsung, one of the biggest players in the smartphone market had recently launched M10 smartphones targeting the same category. It is worth mentioning here that several China-based smartphone brands have a strong market share in the Rs 7,000 to Rs 10,000 smartphone segment in India.

The brand stated, “With LAVA Z92, users can now play their favourite games without any lag, or interruption from incoming calls or messages which can be managed while still playing the game.”

The device is powered by 2.0 GHz Octa Core Mediatek Processor- Helio P22, coupled with 3GB RAM and 32GB of internal storage and an expandable memory of up to 256 GB. On the front, the device has an 8MP camera and at the rear it is embedded with 13 MP camera with a Dual LED flash.