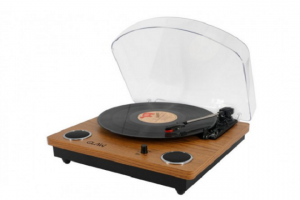 Audio manufacturer Claw has launched Stag Superb Plus Turntable with built-in speakers in India. It has priced the newly-launched product at Rs 8,990. It will be selling it in black and brown colours through online channels as well as offline stores. The company will also provide a one-year warranty with this product.

The turntable comes with a vintage design with wooden finish base and transparent dust cover. As per the company, the ceramic stylus supports 33.3, 45 and 78 RPM speeds. It also supports 7″, 10″ and 12″ vinyl records. It has a belt drive with a manual tone arm and auto stop function to make playback easy claims the company.

The record player is built-in with two units of 3W stereo speakers. It can be connected to external speakers or headphones through the RCA or 3.5mm outputs. As per the company, the Stag Superb Plus also provides an analog to digital recording feature. It allows users to digitize their vinyl records into MP3 audio files on personal computer. This can be done by using the included USB cable and software.

Recently, Claw had launched G11 Dual Driver gaming earphones with Boom microphone in India. It has priced the earphones at Rs 1,490 and is selling it through online channels as well as offline stores. Claw is also offering a one-year warranty with the earphones. It will sell the earphones in black and red colour.

The earphones are equipped with dual 6mm dynamic drivers that give an immersive sound experience as per Claw. The user can hear footsteps, gunshots and other sounds to know where the enemy is located at all times. The earphones also have a detachable boom mic which is 360 degree adjustable. Its in line controls are also accessible with multi-function button with a volume control slider. It works with the mic mute switch as well.