Compatible with virtual Google Assistant, the latest Chromecast 3 will compete with the newly launched Amazon Fire TV Stick in the country 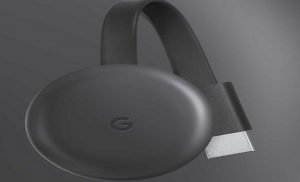 Weighing 39.1 grams and measuring 162 x 51.8 x 13.8mm, the Google Chromecast 3 as per the company will deliver 15 per cent faster performance in comparison to the Chromecast 2. Compatible with more than 800 apps, Chromecast 3 users will be able to mirror content from their smartphones and computers, to their TV sets.

Chromecast 3 will come enabled with Google Voice Assistant which simply means that users will be able to play videos using simple voice commands as well. However, they would have to connect the Chromecast with Google home speaker first. It is believed that Google is planning to enable Chromecast to play music in sync by connecting multiple speakers placed inside a home.

Just like its predecessor, the Google Chromecast 3 also features a hockey puck design and has a “G” logo on top. Google has given Chromecast 3 a matte finish in comparison to the glossy finish found on the Chromecast 2. A Micro-USB support enables power supply while the flexible HDMI cable makes plugging it easy.