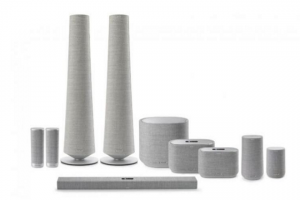 Harman Kardon has launched its latest Citation series of home audio speakers in India. The company has come out with Citation One, Citation 100, Citation 300 and Citation 500, a Citation soundbar; Citation subwoofer and Citation tower speakers.

The company says that the newly launched audio speaker system comes equipped with
acoustic design language along with support for Google Assistant. The series also comes equipped with a high-resolution LCD screen and built-in Chromecast support.
The company claims that the Chromecast support will allow users to stream over 300 audio and video streaming services in HD quality.

Vikram Kher, Vice-President, Lifestyle Audio, HARMAN India said, “Consumers want to stay connected more than ever before. The streaming industry has matured in India and there is a growing demand for entertainment options that can do more than just play music.

The series comes with the option to use the speakers individually or one can also build a 5.1 channel surround sound system. The company claims that the new series comes with WiSa technology, which allows the series to deliver low latency, HD multi-channel and multi-room capabilities. This will allow users to play one music source or play different tracks in different rooms according to Harman Kardon.

Kher further added, “Harman Kardon Citation series is transformational with its legacy audio, premium design and ease of use. From voice control options to multi-room streaming, these new-age products are packed with delightfully smart features. We are confident that our discerning consumers will revere the listening experience of this series.”