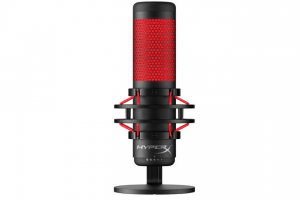 HyperX, the gaming division of Kingston technology company has launched QuadCast microphone in India. The microphone is aimed for streaming and audio recording. The product has been priced at Rs 14,900. The company will be selling it through online channels as well as offline retail stores.

As per the company, the QuadCast features a built-in anti-vibration shock mount. It also has four polar pattern choices, gain control and a built-in pop filter. It comes with a tap-to-mute feature that indicates the mute status by turning off the red LED lighting.

The four polar patterns are stereo, omnidirectional, cardioid and bidirectional. It has a built-in internal pop filter which has been designed to reduce noise for clearer voice quality as per the company.

The company says in a statement, “Over the years, HyperX has become synonymous with gaming. Our continued efforts have created a range of high-performing peripherals for gamers. With the introduction of the HyperX QuadCast microphone, our team is showing its continued dedication to gamers, streamers and casters alike.”

The QuadCast comes with a 3.5mm headphone output for live mic monitoring. It also supports multi-device chat program compatibility. It is certified by Discord and TeamSpeak. As per the company, the mount adapter fits both 3/8” and 5/8” thread sizes and is compatible with most stands and boom arms.

Xiaomi All Set to Launch Mi Band 3i in India