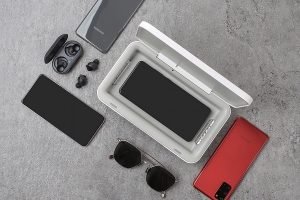 Samsung has launched a new UV Sterilizer that can be also used as a wireless charger. Samsung informed that the sterilizer will be available for purchase via online as well as offline channels. However, the pricing details of the product have not been revealed by the company yet.

The company has revealed that the device is manufactured by Samsung C&T, a partner of the Samsung Mobile Accessory Partnership Program (SMAPP), and it is available via select online and retail stores. The device claims to disinfect smartphones, earbuds, glasses and more in 10 minutes. The sterilizer can house two products at one time.

The UV Sterilizer claims to kill up to 99 per cent of bacteria and germs, including E. coli, Staphylococcus aureus and Candida albicans, according to tests done by two independent test and certification institutes, Intertek and SGS.

The UV Sterilizer features dual UV lights that sterilize both the top and bottom surface of items that are placed inside. The product features with a sleek and minimal design, allowing the consumer to store the UV Sterilizer anywhere in the house. The device automatically turns off after 10 minutes, hence it does not not require a lot of user interaction. Also, the UV Sterilizer claims to wirelessly charge the user’s device at the same time and it supports Qi wireless charging technology.