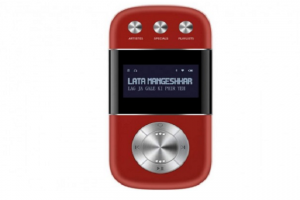 Saregama has launched Carvaan Go 2.0 digital audio player in India. It has priced it at Rs 4,590 and will sell it through the company’s official website in blooming blue, salsa red, emerald green, and classic black colours.

This product is the successor of Saregama Carvaan Go which was launched last year. It comes with two speakers of 1W output each. It is pre-loaded with 3000 retro Hindi songs. It weighs about 141 grams and features a metal body.

The company claims that the Carvaan Go gives up to seven hours of battery life. It also comes with radio connectivity, microSD card up to 32GB and 3.5 mm audio jack. It has 3,000 built-in tracks. They mainly consist of retro classics from Saregama’s catalogue. The Saregama Carvaan App can be downloaded from the Android and iOS store. The user can listen to the local FM or AM station or transfer the song he/she wants to the MicroSD card by using the SD card slot given on the unit.