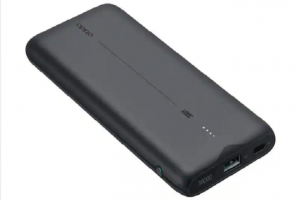 Oppo has launched its 20W Voltage Open Loop Multi-step Constant-Current Charging (VOOC) fast charging power bank in India. It has priced the 10,000mAh power bank at Rs 1,499 and will be selling it through online channel Amazon as well as offline stores.

The company says that the power bank supports two-way charging and is compatible with all smartphones. It has two 5000mAh batteries inside an aluminum arc body. It comes equipped with four LED lights that indicate the left over power status. It also has one USB Type-A port, one USB Type-C port and a physical button.

13 layers of safety protection for the power circuit