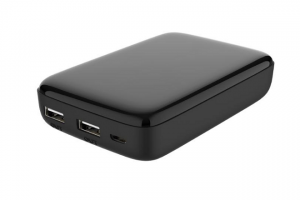 Delhi based Vingajoy has announced the launch of a nano-sized 10,000 mAh power bank in India. Dubbed Vingajoy VB 10090, this pwoer bank weights 170 grams, and is compatible with mobiles, mp3/mp4 players, tablets, portable speakers.

Speaking on the launch Mandeep Arora, co-founder, Vingajoy said, “This product is for the people, who stay outdoors or travel most of the day, with 10,000 mAh of battery backup VB-10090 can juice up the smartphone continuously for two days.”

Vingajoy is retailing its latest 10,000 mAh power bank at a price of Rs 2,499 in the country. The company had started its operations in year 2018 in India.

Two devices at the same time

This latest power bank from the house of Vingajoy comes with 10000 mAh lithium polymer cells. Vingajoy said that the power bank can be fully charged in six hours using a 2A wall charger. There is six-level protection from short circuits, current and voltage overloads and protection against overheating and wrong insertion.

Company’s official statement read, “The VingaJoy power bank can charge two devices simultaneously with two USB 2.0 ports. One can charge his/her smartphone along with one more device in no time. The power bank is fitted with a digital display for battery indication, and also with a flashlight which can be a useful companion while traveling.”

Started in the year 2018, VingaJoy is headquartered in Delhi. The brand offers products such as Bluetooth speakers, headphones, chargers, cables, protectors and more than 125 accessories.