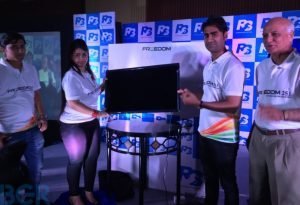 Noida-based Ringing Bells, which was in the news at the start of this year for their controversial smartphone Freedom 251, has recently launched a 31.5 inch LED TV priced at Rs 9,900. Along with this, it has also launched 6 new phones, including 4 feature phones and 2 smartphones and 3 power banks.

In addition to it, the company also announced that it will start shipping the Freedom 251 phone- touted as the cheapest smartphone in the world- once they resume taking orders for it from July 8. The company has further sought help from the Government so that the phone can reach out to as many people.

The company has invested Rs 70-80 crore, of which about Rs 30-40 crore has come from 280 distributors. A national distributor has paid up Rs 10 crore. Investment has come from assembler Sachidanand Enterprises in Haridwar with 33 per cent equity.

About 60 per cent of the components of the phone are made in India, rest is imported from Taiwan and China. Assembling of the phone happens at a Haridwar factory, which will also make TVs.