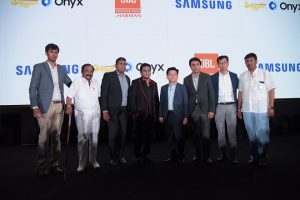 Samsung along with group company Harman has announced the launch of a new Onyx Cinema LED Screen in India’s tech capital Bengaluru at the iconic Swagath Cinemas. Academy Award winner, musician and philanthropist, AR Rahman inaugurated the new theatre during the event.

“The current wave of cinema is replete with great visuals, rich soundtracks and background score. The new Onyx Cinema LED powered by JBL’s iconic sound will transform cinematic experience for movie goers. This mighty combination of a revolutionary screen and legendary sound will truly elevate the content and we are excited for Indian cinephiles to experience this epic offering,” said Prashant Govindan, head, professional solutions, Harman India and SAARC.

Ubon Launches Five in One Speaker in India