VC is a part of the Vierra Group. USA based Vierra also operates Noble Skiodo brand of televisions in India 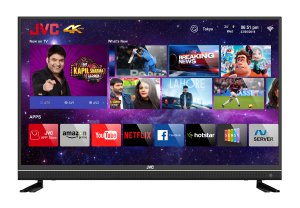 JVC, a part of Vierra Group has extended its quantum TVs range with addition of a 4K 43-inch UHD Smart LED TV in India. The company claims that its latest TV features support to more than 500 licensed apps and one million hours of content to watch.

Company’s official statement read, “With signature Japanese Technology and astoundingly easy to use interface in bezel less design the 43-inch Quantum backlit TV is available on Flipkart.” JVC has introduced this TV at a price of Rs 24,999 in the country.

Interestingly, Vierra Group had also launched a 32-inch smart TV under Noble Skiodo brand recently. The group had launched it at a price tag below Rs 10,000 in India. JVC is retailing the TV using Flipkart’s online portal. Vierra is an original equipment manufacturer based in USA.

JVC’s official statement read, “Also, packed with the powerful Dolby-certified speakers (20 W + 20 W) to ensure an enthralling aural experience, this TV has an inbuilt soundbar that features a front-firing a front firing Direct to Hear sound technology. The JVC 43N7105C 4K TV is powered with quad-core 1.5 Ghz processor and Mali 450 Quad-core processor for impressive and uninterrupted performance. The eight GB of inbuilt memory and 1 GB of RAM ensure that your TV operates smoothly without lag.”

It continued, “Equipped with the smooth and intelligent User Interface- Sensywall, the TV enables the user to view more than 30 trending videos on the home page. Furthermore, the E-share application provides seem less mirroring of picture directly from your smart phone to your TV, bringing uninterrupted experience. The TV comes pre-installed with a host of applications, such as Hotstar, YouTube, Netflix and many others (up to 500 which guarantees 1 Million Hours of Content to watch) to ensure that you’re always entertained.”