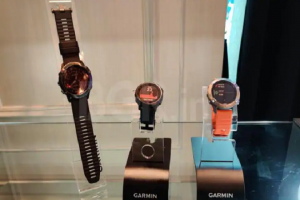 Garmin has launched the Fenix 6 series smartwatch in India after the product was globally announced in August this year. The series include Fenix 6S, Fenix 6 and Fenix 6X Pro Solar. The company is selling the series in both core and form factor. It has priced the Fenix 6 Core with sapphire carbon grey diamond like carbon (DLC) with black band and the 6S with sapphire rose gold with powder grey band or carbon grey DLC with black band at Rs 79,990.

The sapphire carbon grey DLC of Fenix 6X with black band, 6X Pro Solar in sapphire titanium carbon grey DLC with black band and DLC titanium bracelet have been priced at Rs 84,990, Rs 94,990 and Rs 1,14,990 respectively. The company says the core variant is aimed at athletes and the watch variant at lifestyle consumers. Garmin will sell the watches through online channels like Amazon India, Flipkart, Paytm Mall, Tata Cliq and offline channels as well.

The Fenix 6 and Fenix 6X come with a 3.3 cm (1.3-inch) and 3.5 cm (1.4-inch) sunlight-readable display respectively. The Fenix 6S sticks has a 3.0 cm (1.2-inch) display. The watches come with PacePro feature that keeps a runner’s pacing strategy on track claims Garmin. Runners will be able to create plans directly from the watch or ahead of time using the Garmin Connect app.

Garmin claims the Fenix 6X Pro Solar is the first GPS smartwatch from Garmin to offer solar charging. It is designed with Power Glass which is a transparent solar charging lens. It is rated to last for up to 21 days with an additional three days with solar charging capabilities.

The company is offering some other variants of the watches as well. It has priced the 6S Watch variant in sapphire rose gold-tone with heathered black nylon band, sapphire light gold-tone with shale grey leather band, sapphire titanium finish with ember orange band and sapphire black DLC with heathered red nylon band at Rs 82,490. Both the sapphire titanium variant of Fenix 6 with vented titanium bracelet and 6X in sapphire black DLC with brown leather band are priced at Rs 91,490.